My brothers, Chris and Greg, and I looked back on our Uncle Tony’s life and remembered several things about him and who he was.  I put all of these memories of him together in this poem to honor his life.  The memorial for him was a week ago today at my Aunt Marlene’s in Raymore, MO where many family members gathered to tell stories about him.  It was one of the best memorials I have attended.  It wasn’t sad; it was celebratory.

Born in April, a diamond in the rough,

A man’s man who was always tough.

A man of honor was he

Serving in the military to help people be free.

He worked an eclectic mix of jobs over the years:

A master carpenter was one of his professions,

Crafting beautiful work without any concessions.

He was a talented musician continuously ready to jam

With family and friends always leaving with a finish that would slam.

Referring to everyone as cats and chicks,

When talking to him, it was his schtick.

An animal person we all could ascertain

With his most beloved pet, Burgundy, his Great Dane.

He loved his family, especially the grandkids and Grandma T.

Willing to do anything for her – quality was the key.

Never batting an eye to speak his mind,

Tony was definitely one of a kind. 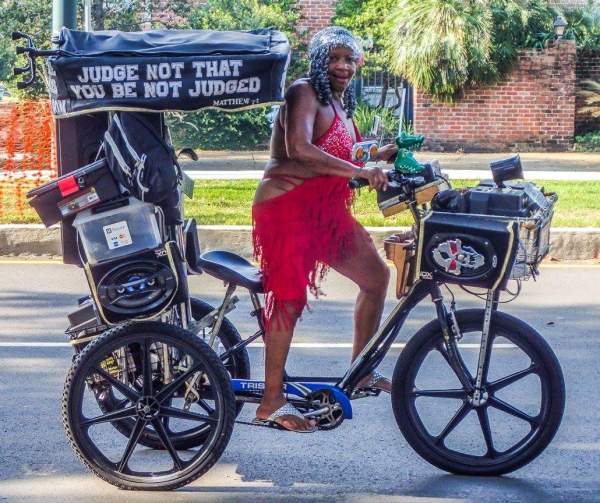 Desiring a streetcar to arrive as soon as it can,

Heading back to the French Quarter was the plan.

Sitting outside a café admiring the houses of the district garden,

We heard some loud music while talking where I had to say, “Pardon.”

Coming down the street was a tiny carriagelike vehicle with pedals

Sporting a surrey on top decked out in black drape with silver accents of metal.

Bearing a biblical quote, “Judge not that you be not judged,” in all caps full of might.

And smiling so gleefully to bring us her mobile entertainment station.

With sandals and Cleopatra headdress in shiny, sparkling silver to name.

She stood up on her pedals and shook to and fro

As she smiled and blew kisses as she would to a beau.

Seeing the back end of her carriage with “Party on Wheels” like she had just done a mic drop.

When in New Orleans, you never know what you will see

As we go on treks down different streets awaiting any kind of mystery.

We heard that loud music that almost put us in a daze.

“Party on Wheels” appeared again right outside the patio gate

She stopped and danced in her gold and purple as if in a Mardi Gras state.

We all blew her a kiss as she reciprocated back

Leaving us entertained in sheer delight with none to lack.

Not sure if we would ever see her again,

Later that night she was dancing on Bourbon recognizing us as if we were close friends.

“Party on Wheels” left such an impression

Her name remaining a mystery leaving her as a living legend.

From our trip to New Orleans, LA in October 2017